What's on your mind?

I mean not once was there any mention of Strudel having any owners currently, but I do know it was once revealed that she was raised by a German scientist, but I have no idea if she still resides with him.

It’d be great if someone could help out 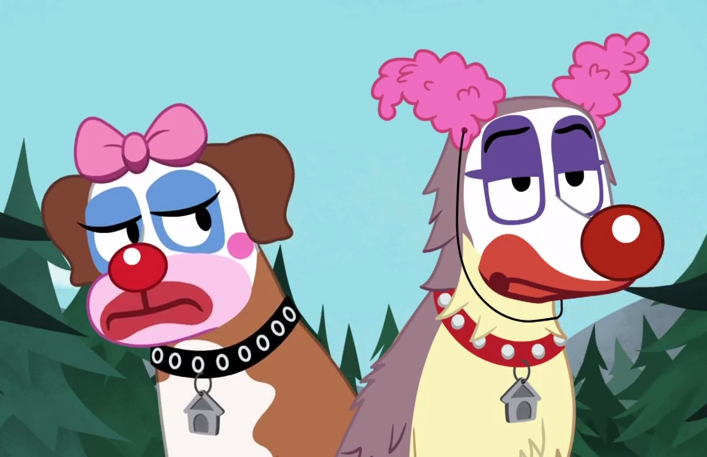 Because I love this show so much its awesome

This is the place to talk about your favorite topic, to share news, theories, ideas, and to connect with others. The content from your Forum has been converted to Discussions posts, so nothing has been lost.

To learn more about what you can do here, check out community.wikia.com/wiki/Help:Discussions

If you're an admin on this community, read more about how you can customize your Discussions and set up guidelines for contributors: community.wikia.com/wiki/Help:Admin_and_Moderator_Tools_in_Discussions

This is a thread for anyone who has some merch to sell.

I'm looking for the figure sets new in box, as well as the plush display box. And possibly the canadian promo DVD that was given away at Toys R Us Canada

I started watching Season 1 and got to an episode where we started seeing Cookie in some family's home, yet in earlier episodes this wasn't introduced at all. Was she always adopted yet her family wasn't shown, or am I missing an episode where Cookie got adopted? I tried Googling around for answers but to no avail.

When i watch the show and saw Niblet and Squirt talking about this:

Squirt: Yeah, I knew a marmot once who got his picture on boxes of nuts. Guy was fixed for life -- all of the pistachios he could eat.

Niblet: Wow! Can I get my picture on a bag of marshmallows, Lucky? 'Cause I love marshmallows, and I want to be fixed for life, too. I mean, not fixed fixed, but, you know...

What does this means?

Hello, i am wondering: Will that show ever be renewed for season 4 or be cancelled forever? That show is my favorite show since few months ago. And i was sad when i found out that Pound Puppies has been cancelled. If the show can/will be renewed, please IMMEDIATELY tell me when it will be renewed and when it will air season 4. If its really cancelled forever, please tell me what to do to make them continue airing it, but dont tell me to write letters as i live in asia. That is all, hope someone sees this comment and reply to me as fast as possible

Good afternoon, I'm very proud I can help you develop this wiki. I'm Polish, so I'm not good in English, so be forgiving, please. Can you help me with English, please?

Okay, so, correct me if I'm wrong, but "Doubles Trouble" was the last episode uploaded on the Hub site. As most of you are well aware, poor people (like me) don't have cable, satellite, on-demand or any of that, because shockingly enough, we can't afford it! Moving on, since "Doubles Trouble", there has been not one, not two, not four, but SIX episodes, that have long since been broadcasted, and added to Hasbro's money-grubbing YouTube page. And why am I pissed off. Because I've been checking the Hub website to see if the episodes were uploaded for two weeks! That is ample time for the episodes to be posted on the site. I have no problem with Hasbro wanting people to pay for the vids (though I still think $2 for a 20-min video is quite inflated), but would it really kill them and their pockets to upload the shows on the site and at least leave them up for, say, a week and a half? That's all the time I would've needed to watch them, really. It seems to me like they're getting crazy with this paying thing.

Perhaps there's a logical explanation for this? If anyone would like to share, I'm listening... well, reading.

(Yes, I was obviously mad when I wrote this. Apologies for the tone.)

This might not get much attention, but I would like to bring awareness that the female mutt on the bottom row in the center is NOT a mutt, or if she is a mutt her breed base can still be identified. So far I see she has red fur with a white stripe on the top of her muzzle, a white chest, and white front paws as well as a long and possibly fluffy coat, floppy ears, and a sturdy-built body shape. These are all traits a Nova Scotia Duck Tolling Retriever has, and if you don't believe me or have never seen/heard of one before I would like to advise you to look it up. They are very beautiful breeds of course and you would find a lot of similarities, especially including the female dog in the episode is not a small breed. It was just kind of a pet peeve of mine that they had listed her as a mutt, so I wanted to clarify that she was not a mutt at all, just a very uncommon breed that people don't hear of now adays.

Recently Eric McCormack (the voice of Lucky) tweeted that he thinks that Pound Puppies is done, but he hasn't heard anything official.

I am not giving up. Now, more than ever, we have to show our support;

So please, write letters to Hasbro and tell them that you enjoy the show and want it to continue;

Please show your support and write letters to Hasbro and Hub's viewer relations. Volume is the key. This is a time for action.

(edited by WikicontributorHubpup)
So do you guys like the new global navigation. The one with the picture of the characters.
(edited by Ray422)

How sure are we that Missy is dark brown and Muff Muff is reddish brown? Because according to Behind the Voice Actors, it's the other way around: http://www.behindthevoiceactors.com/tv-shows/Pound-Puppies-2010/side-by-side/

Hello. I am TheNewGuy01, But you can call Me Bowser (That's Not My Real Name!). I'm new around here. I started watching the series ohh, About...Two Years Back? Right, Well anyways, I am here to do whatever i can to Help make a BIGGIIE community out of a liiitttlee bity Computer screen. Also, You ever see a signature like this TheNewGuy01 Says: I luv Weird Al!? I CaN hElP out with stuff like that! Even change the header, Set up special pages, Show You All the Messages this wiki HAS to offer! And i hope to make some goood friends ;) (I can customize Emoticons too!)

Season 3 is fast approaching, very soon there will be new episode pages to create, as such, I think we should make sure that the plot sections of our existing episode pages should be complete/consistent.

Currently, the various plot sections are either blank, or inconsistent. In getting them done, we need to decide in what format they should be in;

Personally, I would be in favor of the shorter plot descriptions. since they are much less bulky and don't overwhelm the page, and readers are more likely to look at the sections below it.