Agatha McLeish is Leonard McLeish's wealthy mother who, at first, despised dogs. However, Rebound made her change her mind.

Head Dog Catcher McLeish's two biggest fears have always been his bossy brother-in-law, the mayor, and his wealthy mother. The first time we met Agatha, she was scary and hated dogs. But after Rebound melted her heart and woke up her inner child, Agatha became the ultimate dog person. Now they enter dog shows, go to sci-fi conventions, and even take cruises together. Sweet!

In "Rebound", she came to visit her son at his workplace. McLeish, wanting his mother to respect him, disguised Shelter 17 as another place of business. The disguise fell apart, and Agatha, who hated dogs, left, disgusted. Unbeknownst to her, Rebound (Who had just been yelled at by Niblet) had gotten into her limo. When she returned home, Agatha was initially horrified that there was a dog in her mansion, but quickly grew to love Rebound, as the energetic puppy made her feel young. She thanked her son (whom she believed had put Rebound in the limo as a surprise) and adopted Rebound.

She was mentioned in "The Prince and the Pupper" by Rebound and in "Lucky Gets Adopted" by Niblet through Woof-Bark-Tooth Day.

In "My Fair Rebound", she is at a tea party with Sterling Von Oxnard's owner Mildred, talking about he and Rebound training for the dog show.

In "Zoltron", she and Rebound are attend a science fiction convention, both dressed like aliens.

In "Bone Voyage", she was on a cruise ship without Rebound until she missed her so much she had her butler pick her up and take her back.

In "The Fraud Princess", Agatha has a new boyfriend, Wally Banks, who left his dog Princess with Rebound as a playmate. In truth, Wally and Princess were planning to rob Agatha so they could gain their money back after the market went bad. Despite this, Agatha forgave Wally and started helping him get back on his feet.

She made a brief appearance in "Beauty is Only Fur Deep."

She appeared in "The Truth Is in Hear", having been called to Shelter 17 by McLeish, who believed he had discovered that the dogs were aliens. With no evidence, Agatha thought her son was being delusional, and had embarassed himself in front of the TV crew he had also summoned.

Agatha with Rebound and Mr. Julius. 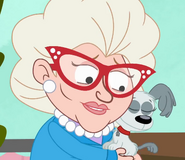