View source
watch 01:36
We're Getting Mutants in the MCU - The Loop
Do you like this video?
Play Sound

Cupcake is an American bulldog puppy who first appeared in "Mutternal Instincts", and was adopted by Cookie's family in the same episode.

Following her arrival at Shelter 17, Cupcake and Cookie became very attached to each other, with Cupcake calling her "Cookie Mommy." Unbeknownst to Cupcake, Cookie was actively preventing her from being adopted. After Cupcake was accidentally nearly sent to the dump, Cookie took her to Shelter 52, telling her she had to be adopted. Although sad at first, after Cookie told Cupcake how wonderful having a family was, she happily went into the shelter, but not before giving Cookie a farewell nuzzle and telling her she loved her. Ironically, Cupcake was soon after adopted by Cookie's owners, and the two were joyfully reunited.

In "The Super Secret Pup Club", Cupcake, along with Rebound and Patches, forms her own puppy placement team after being told she is too young to help the Pound Puppies.

In "Salty", Cupcake and her friends met Salty at the pier. They later helped with the tryouts for Salty's replacement.

In "I'm Ready for my Close Pup", fame went to Cupcake's head when she temporary switched places with tv sitcom star Pooches. She was brought back down to Earth after seeing her family at one of the show's tapings.

In "All Bark and Little Bite", Cupcake, Patches and Rebound are made official Pound Puppies-in-training by Dolly after saving Lucky from a bull.

Cupcake is a helpful puppy, but she can be bold when she needs to be. Cupcake is helpful, funny, carefree, happy, bold, eager, forward. She loves Cookie as a mother. She is good friends with Patches and Rebound. She also mentions that she likes to chew on stuff.

She mainly has very light brown fur with a splotch of dark brown fur on her back. Her ears are short and rounded at the end, and colored dark brown. She has very light beige on her muzzle that ends in a tip between her eyes. She also has some on her paws that end in a wave, and on her stomach that starts round at her neck and ends at the edge of her stomach, and she also has it on the tip of her tail. She also wears a magenta collar with light pink hearts around it.

There's something funny going on around here... 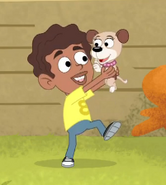 Cupcake with her perfect person Donnie

Cupcake with her adopted mother. 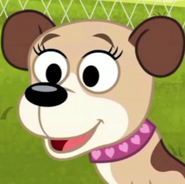 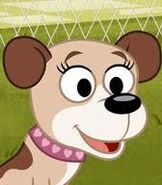 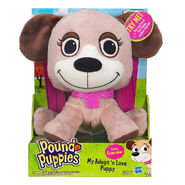 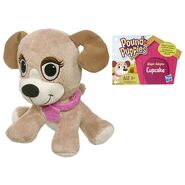 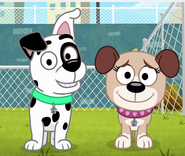