Dot Henderson is a young girl who adopted Lucky in "Lucky Gets Adopted."

Dot is loud, talkative, exuberant and happy-go-lucky. She can be oblivious to the feelings of those around her; she failed to see that Lucky was less than happy with her overt showers of affection, and didn't realize she was being insulted by her classmates. Dot can be something of an oddball, bestowing her pets with strange names and dressing them up in gaudy costumes.

Despite this, however, she does care deeply for her pets and was sad when Lucky told her he had to come and go when he had to, but understood that his job was important. This shows she may be lonely, as she was sad when Lucky originally ran away and was very happy when he returned.

She can also be very trustworthy, as Lucky found that he can trust her with the biggest secret of dog kind: That they can talk. With this information, she was able to help with Millard when he revealed he was very shy, as Lucky felt she was the best person to go with to help fix their issue. She also kept this secret quite well, justifying Lucky entrusting her with it.

Before her first appearance, Dot owned a pet hamster whom she named Prince Fudgiepaws, and she named Lucky "Mr. Chewy McFluffster" because she thought he was fluffy and "chewy" (after chewing on his ear). Something of an oddball, Dot was overbearingly affectionate with Lucky and dressed him up in a tutu, wig and makeup for her school's talent show. She was oblivious to the taunts from her mean-spirited classmates, believing they were encouraging her. After Lucky helped her win the talent show, he revealed to her that he could talk and that he needed to leave from time to time to work at Shelter 17. Although reluctant at first, Dot was convinced to let Lucky go after he assured her that he loved her and promised that he would always come back.

Dot returns in "No More S'mores." A shy puppy named Millard comes to the pound and shows many signs of being scared of humans. Lucky decides that the only way Millard could learn not to be so afraid would be if he got to meet a human for himself. So, to facilitate this, Lucky takes him to meet Dot, who is leaving for a camping trip. Lucky explains the situation to Dot and she tries to be gentle with Millard by petting him nicely. Millard seems to enjoy it, but then Dot's mom enters the room he hides in Dot's backpack, ending up coming along with her on the camping trip. Lucky and the gang chase them down and end up on the camping trip as well. At first, the dogs try and secretly get Millard out of the backpack, but they get discovered by all the campers and counselor. Lucky discovers that Millard's perfect person is a shy girl named Jennifer, who is one of the campers. Millard even shows signs of wanting to run up to Jennifer, but can't quite shake his fears off. So, to get the two together, Lucky gets Dot to talk to Jennifer, giving Millard an opportunity to run up to her, but ultimately the pup loses his nerves. Finally, towards the end, involving an incident with a fake swamp monster (courtesy of Strudel) Millard summons all his courage and happily ends up with his perfect person.

In "The Pupple's Court", Niblet brought her to Lucky's hearing and when it was discovered that Lucky revealed the secret of dogs talking to her, she almost got Shelter 17 disbanded, only to tell them that if it wasn't for Lucky she wouldn't have become a better pet owner.

In "Lucky Has to Move", Dot joined Lucky and the other Pound Puppies on a mission to try and sabotage her father's job promotion so they wouldn't have to move away.

She has ginger hair (in pigtails), fair skin and a tooth gap. She wears violet ribbons, red glasses, a green shirt (with a pink flower), blue jeans and pink shoes.

Dot petting Lucky while talking with other campers 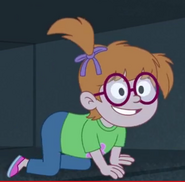