Leonard McLeish is the head dog catcher of Shelter 17. He despises his job, and is always looking for a promotion from his brother-in-law Jerry (the Mayor). Leonard is often moping around about the fact that "nothing interesting ever happens" around the pound.

McLeish hates dogs and is always looking for a promotion from the Mayor, his brother-in-law. He seems to have become a dogcatcher simply because it was a low-ranking government job where he could get a promotion and impress his brother-in-law. He does not care much about the well-being of the dogs in Shelter 17 and will refuse to let a potential dog-owner adopt a dog if he feels that he is busy, although in "McLeish Unleashed," it is shown that he does has a soft spot for dogs, and he even adopts one of his own in "I Heard the Barks on Christmas Eve." Although he still shows disdain for other dogs in later episodes, he positively dotes on Ralph.

He is afraid of his mother, Agatha McLeish, but at the same time craves her approval. He is also shown to be unintelligent in a few episodes.

His job is to get dogs adopted, but all Head Dog Catcher McLeish cares about is impressing his brother-in-law, the Mayor. Whenever people try to adopt, McLeish buries them in paperwork and drives them away. But his cluelessness works, because he's too dense to see what the Pound Puppies are really up to.

In "McLeish Unleashed", he gets a promotion to Sewage and Waste Water Management, and while he enjoyed his new job, he became disgusted with the way his replacement, Milton Feltwaddle ran the pound and came back, taking back his job.

In "Good Dog, McLeish!", he was accidentally hypnotized into thinking that he was a dog, and ended up joining the Pound Puppies on a mission. When he snapped out of his hypnosis, he remembered nothing of the experience.

In "I Heard the Barks on Christmas Eve", the Pound Puppies left a dog named Ralph in his home as a Christmas gift, whom he joyously embraced.

A hypnotized McLeish in a dog suit 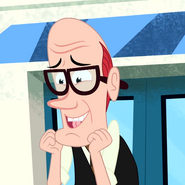