Lucky is the leader of the Shelter 17 Pound Puppies unit.

Lucky is a Schnauzer. He is a medium sized dog with a layer of greyish-brown fur atop his backside, ears and tail. Light yellowish-tan fur covers the bottom half of his torso, his legs and his face. He wears a red collar with a silver tag and rivets.

Lucky is friendly, kind, and professional with a "never give up" attitude. He firmly believes that there is "A pup for every person, and a person for every pup." He doesn't believe in luck, despite his name.

Lucky is shown to have several flaws, and sometimes loses focus on what is important; examples of this are seen in "Rebel Without a Collar", "Snow Problem", "Lucky Gets Adopted" and "When Niblet Met Giblet". He gets along with most animals, but dislikes coyotes and tends to have a bumpy relationship with cats.

He may not be a purebred or stand out in a crowd, but make no mistake -- Lucky is the leader of the Pound Puppies pack. He's smart, cool, and smooth -- and he can pull off any plan with style. He's also brave and always puts himself in danger first, before his dogs. Still, like any good leader, he lets his friends learn and grow through their mistakes.

Lucky's first real focus episode was "Rebel Without a Collar," where he showed disdain at Cookie's growing relationship with the coyote Fang, and was dismayed to hear she was leaving the Pound Puppies to live in the wild with him.

In "Taboo", Lucky went out of his way to prove that the new puppy was not a jinx. He finally discovered that Taboo's "bad luck" was all staged, and the puppy was adopted by Mr. Geekman.

In "I Never Barked for My Father", Lucky encountered his estranged father Slick. Outraged at being seemingly abandoned by Slick as a puppy, Lucky refused to give him and his partner Chip shelter. Eventually, he learned that Slick did not abandon him, because his owners were not the same people who owned Lucky's mother, and that they had moved away. Every time he saw him, Slick wasn't running from him, he was running to him. He also learned that Chip is actually his half-brother, but was convinced to keep that information between himself and Slick.

In "Lucky Gets Adopted", Lucky was adopted by an odd little girl named Dot, who named him "Mr. Chewy McFluffster." After suffering bone-crushing affection and tutu-wearing humiliation while being teased by Bully Cocker Spaniels, Lucky escaped, but was convinced to return by Cookie, and helped Dot to win her school's talent show. Afterwards, Lucky revealed to Dot that he can talk, explaining to her his work at Shelter 17, and that he needs to be able to come and go when needed.

In "Cuddle Up Buttercup", Lucky sneaked into the house of an aristocratic boy named Percy to rescue Buttercup. To avoid detection, Lucky pretended to be a toy, and Percy named him "Sir Stinky Snout."

In "When Niblet Met Giblet", Lucky's feelings for Cookie are again brought up, and thanks to Niblet, they both find out that they have feelings for each other.

It is revealed in "Hail to the Chief", that Lucky was once a recipient of the Pound Puppies' World-wide Order of Finderhood award, or "WOOF" for short, the highest honor that a Pound Puppy can receive.

In "Lucky the Dunce", Lucky becames goofy and simple-minded after an accident with Strudel's electronic scrambling laser. During his condition, he and Niblet got along great, and Lucky even told Niblet that he wanted things to "stay this way forever." Ultimately though, Niblet realized that it was best for everyone for Lucky to go back to normal, and Strudel was able to reverse the laser's process and get Lucky back to his old self. A bit later, Lucky thanked Niblet for talking care of him, and told him that he was a good friend.

In "Lucky Has to Move", Lucky discovers that Dot's father is in line for a promotion, which would require the family to move to Florida. Not wanting to separate from Dot, Lucky enlists the Pound Puppies in an attempt to sabotage the demonstration at Dot's father's workplace. They ultimately fail, and Lucky bids his friends goodbye. On the way out of town, the family is stopped by Dot's father's boss, Mr. Stinkman, who (due to the Pound Puppies placing Beardy in his house the night before) decided to have Dot's father stay in the city, and has the whole family move into the company's guest house, which turns out to be right next to Shelter 17. Lucky digs under the house's wall, and happily reunites with his friends.

Lucky in his first appearance.

Lucky and his father.

Lucky when he was younger.

Lucky with his owner, Dot.

Lucky being crushed by his new owner.

Rapper Lucky in the hiz-zouse! 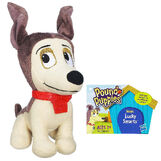 Lucky as a plush toy.

Translation: "What a cruel world!" 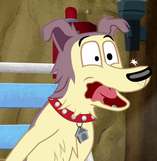 "This is a fine time to be taking a nap!"

Oh, no! Discord somehow crossed dimensions, found a way to turn his energy into a laser and got Lucky! It's the wrong universe, but... EVERY-PONY RUN! 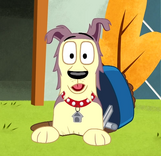 he got rabies lmfao

Lucky and Cookie may love each other, but they sure don't love THIS!

A girl and her dog! 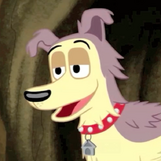 Lucky meets with a Bull