Ralph is a Labrador who first appeared in "I Heard the Barks on Christmas Eve." He is voiced by Fred Stoller.

Ralph originally came from Hawaii, but was later brought to Shelter 17. He tends to have a pessimistic outlook and likes to chew on old shoes. Rebound, Cupcake, and Patches tried to help him find his perfect person, but were unsuccessful, partly due to the fact that Ralph didn't believe that any human would want him. Rebound gathered together some pups who had been helped in the past by the Pound Puppies, and convinced Ralph to believe in himself. Based on his personality, Lucky realized that Ralph's perfect person was Leonard McLeish, and left Ralph inside McLeish's home as a Christmas gift.

His next appearance was in "Once a Ralph, Always a Ralph", in which the Pound Puppies suspected him of intentionally ruining their plans. In the end though, they found out that his actions were just accidental. One action, accidental or not, ended up repelling the Kennel Kittens, and ensuring the adoption of Chauncey.

Ralph next made a brief appearance in "The Truth Is in Hear," chewing on one of his owner's shoes. When McLeish reclaimed the shoe, Ralph pulled out a slipper from under his pillow, and starting chewing on it.

Ralph was very pessimistic before his adoption, a trait which seems to have lessened since. He is also highly apathetic; He barely takes notice of what is going on around him, and hardly ever seems to care about anything, save for lying around and chewing on shoes. 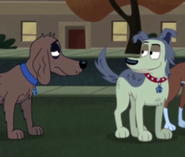 A merry Christmas for both Ralph and McLeish.