Squirt is a chihuahua and is the dealer of the Pound Puppies. He's able to do anything you tell him to do... for a price.

Squirt is a pure-bred Chihuahua. He has a small build, with large bat like ears, tiny legs and a skinny tail. His fur is a light tan and he wears a spiky black collar with a silver bone shaped tag.

Squirt is a street-smart dog. He is tough for his size, and a canny negotiator and haggler. He will often mutter "Ah, Sheez" when he is exasperated or frustrated.

Squirt has a tendency to make snarky and sarcastic comments, and will often poke fun at the other members of his team, especially Strudel. He can also be very stubborn, often unable to get over certain prejudices toward others. At the end of the day though, he cares for his fellow team members and always comes through for them in the clutch.

Meet the dog who can get you anything you want ... for a price. This Chihuahua loves a good deal. Small and wiry, he's an expert at slipping through tight spots and along narrow beams. He knows the city like the back of his paw, so he can always get the team out of a jam.

Squirt's first focus episode was "The Prince and the Pupper". Dissatisfied with his work at Shelter 17, he decided to switch places with Cuddlesworth P. Wigglebottom, a high society dog who looked just like him. Although he enjoyed the high life at first, he started to miss his old life, returning just in time to settle a deal with some coyotes.

In "Homeward Pound", Squirt ended up lost in the canadian wilderness with Niblet following a mishap at the airport. As they tried to make their way home, Squirt was constantly annoyed by Niblet's antics, eventually seperating from him. However, when Squirt got into trouble, Niblet bailed him out, with Squirt later admitting he was wrong.

In "The Really Weird Dog", Squirt was outraged at the idea that the Pound Puppies were expected to help an alligator named Rover, believing that a friend of his named Peewee had been eaten by an alligator. He intentionally sabotaged the others' plan to get Rover away from the hunter Cap Wilder by ringing the fire alarm early. Afterwards, Squirt discovered that Peewee hadn't really been eaten by an alligator. Feeling guilty, Squirt went to rescue Rover, inadvertantly revealing to the humans present that Cap was actually Rover's former owner. With the two reunited, Rover left the Pound, but not before Squirt gave him the standard dog tag given to every adoptee.

In "McLeish Unleashed", Squirt's small size enabled him to escape from the high security Milton Feltwaddle had placed upon Shelter 17. Using the "puppy dog eyes" look, he was able to lure McLeish back to the pound, where he ousted Feltwaddle, taking his job back.

In "Return of the Kittens", Squirt disguised himself as a cat in order to infiltrate the Kennel Kittens' base to retrieve a device the cats had stolen from Shelter 17. During his infiltration, Squirt came to genuinely like the cats' company. Just as Squirt decided to tell the others not to spring a scheduled trap on the cats, he was unmasked and detained. He escaped just in time to settle things peaceably between the Pound Puppies and the Kennel Kittens. Fluffy even asked him to share a saucer of milk with her sometime.

In "Zipper Zoom-it", Squirt revealed his past as a frisbee catching dog, using it to teach a pup named Tiffany how to catch frisbees.

In "The Super Secret Pup Club," Squirt gets trapped on top of a partly-constructed building. Too afraid to move at first, he is convinced by Patches to imagine he is on a jungle adventure, and manages to climb down by himself.

In "Cuddle Up Buttercup", he is mistaken for a stuffed toy while hiding in a toy store, and gets "bought" by a mother for her toddler.

A happy reunion back at the pound. 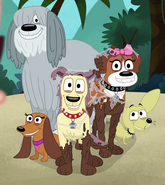 WHO YOU ARE CALLING BOYS, WERE FEMALES!!!