Strudel is a female Dachshund with a Rearendian accent who is the smartest of the group. She uses the squirrels on the team to help her build her inventions since she doesn't have opposable thumbs.

He has a long body and a pink collar. Strudel has ears and eyes.

Strudel is intelligent and level-headed. She usually keeps a cool and calm demeanor, but can lose her temper when something goes wrong.

Although she enjoys her position as Shelter 17's tech expert, she sometimes expresses regret over not going on many missions, which she believes is due to her athletic body shape.

Strudel can be arrogant at times: During "Olaf in Love", she was asked if an idea of hers would work, to which she replied, "It is my idea, therefore it is brilliant".

Strudel is very fond of her squirrel helpers, Nut Nut in particular. On that note, it should be noted that Strudel's influence with squirrels extends far beyond her helpers at the pound, as she is more than capable of convincing wild squirrels to work for her, thus earning her the rightful title of "Squirreldog".

She may be a tiny dachshund, but Strudel is the brains of the Pound Puppies crew. This master of strategy and problem-solving can design whatever tools the team needs. Seems there's nothing she doesn't know. Strudel's also great at getting other animals, like squirrels, to help her out.

Strudel's first focus episode was "Dog on a Wire". Sullen over the lack of action in her position, she is chosen by Lucky

to bring a circus dog named Chuckles back to his home. After getting Chuckles back to his owner, Trixie, Strudel inadvertently gets in on the act, covering her lower half in sparkly pink paint and balancing on a rubber ball. The ringmaster then incorporates Strudel into the act. Strudel, amazed at herself, agrees to stay, forsaking her role in the Pound Puppies, and taking on the stage name "Glitterpants". One night, Strudel is called to go on solo. She is ecstatic at first, unlucky Lucky comes in and tells her that circus head, Mr. Ringbinder intends to sell off Trixie's other dogs, and only keep her. Once on the trapeze platform, Strudel feigns stage fright to get the rest of Trixie's dogs to join her. Afterwards, Trixie and her dogs make a deal with another circus (Which would allow them to stay together) and Strudel returns to Shelter 17 with the others. She declares that her showbiz days are over, but can't resist doing one more flip.

Strudel revealed that she was once a show dog in "My Fair Rebound". Although she never won any awards, she uses her experience to train Rebound for the Northminster Dog Show.

In "Toyoshiko! Bark Friend Machine", Strudel becomes friends with Toyoshiko, a robot dog that was brought to the pound by Milton Feltwadle. When it is learned that Toyo had recorded everything that went on in the Pound Puppies' headquarters, she voluntarily erased her memory with a magnet, leaving Strudel heartbroken at the loss of her friend. Strudel, after several days, reprograms Toyoshiko, so she can't record anything and still function.

In "The Call of the Squirreldog", Strudel tells The Rottlers to stop roughhousing, during which Strudel's past with Mr. Nut Nut is revealed. When the squirreldog was brought to Shelter 17,

Strudel took it upon herself to prove to him that he was really a squirrel. By the time this was accomplished, she had become attached to him, and they sadly parted ways. Shortly afterward, Strudel went looking for Nut Nut, but was pinned under a fallen tree branch. Strudel was rescued by Nut Nut, and she gleefully asked him to come back to the pound. Nut Nut agreed, and brought several other squirrels with him (including Sparky).

In "Olaf in Love", she attempted to use information she had gleaned from movie and TV to get Olaf together with Gertrude. Her suggestions that Olaf "play it cool" resulted in Gertrude storming out, with Strudel later admitting her mistake. When Olaf and Gertrude finally did get together, Strudel wanted to stay and watch, for the purpose of "scientific research."

In "Puddles the Problem Pup", it is revealed that when she was a puppy, Strudel was raised by a Rearendian scientist named Professor Schmierkankle.

In "Hot Dawg!", Strudel and Cookie both fall for Antonio, to the point where they argue over him. Fortunately, Antonio was able to convince them to be friends again.

In "Hail to the Chief", Strudel was to receive the Pound Puppies' World-wide Order of Finders award ("WOOF" for short). However, Niblet and a pup named Chief accidentally disrupted her ceremony. Since Strudel took responsibly for the disruption, Ping tasked her with finding a home for Chief, to prove that she was truly worthy of the award. Ultimately, the adoption mission was a success, but Strudel decided to pass on the award, feeling that she was not yet ready, noting that someday she would be.

In "Pound Vengers", she takes up being a superhero, with Niblet as her sidekick.

In "Lucky the Dunce", Strudel's electronic scrambling device goes awry and causes Lucky to act zany, though she is later able to reverse the effect. 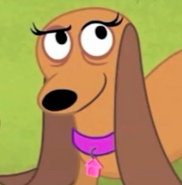 Strudel and Yipper with the original Free Kid Database.

Strudel as a puppy

Unless that's an anvil, this isn't going to work!

The Squirreldog in its natural habitat.

Even geniuses have crazy moments.