View source
watch 01:36
We're Getting Mutants in the MCU - The Loop
Do you like this video?
Play Sound

This article is referring to the character, you may be looking for the episode.

Taboo (later renamed Lucky) is a puppy who first appeared in the episode of the same name.

Taboo ran away from home after unintentionally causing trouble for his siblings. He was taken in by alley cats, who told him all the trouble he caused was because he was cursed, which gave him his name. Many dogs tried to help him but failed. However, when Lucky and his gang came along, Taboo discovered that the cats were causing everything to happen, as part of their schemes to extort food from others who wanted to return Taboo. Shortly after, he was adopted by Mr. Geekman, a schoolteacher who always had accidents, and given the name "Lucky."

In "Squawk" he made a cameo with a man rather than a schoolteacher alongside Barlow, Twiggy, Kiki, and Sterling Von Oxnard. He later had a small speaking role in "I Heard the Barks on Christmas Eve." 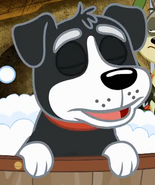 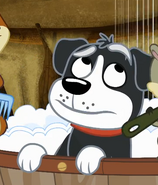 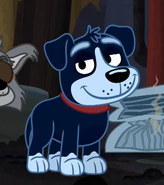